That’s definitely a good question. It’s always great to save some money. But sometimes it could  backfire on you. Take this picture for example this person was trying to fix a leak And it did work for 2 months. They had to repair their ceiling and they painted the whole room. They didn’t do it correctly so after about 2 months they ended up with the same leak again. Because they made a big mess out of it ,it cost them extra money to regrout the shower professionally. Not only that but they had to fix their ceiling again and repaint after they just got done painting two months earlier.

It normally takes us three months of training somebody on several showers a day before they could do it without us supervising. And most homeowners do not caulk and grout for a living so It’s not really advised  to take it on yourself. Always better off hiring The Grout Man for your caulk and grout needs

We have been honored by Angie's List with the Super Service Award! We are truly honored! This is a testament to our "Customers First" mindset and attention to detail in ensuring customer service is our first priority! 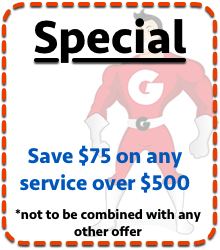